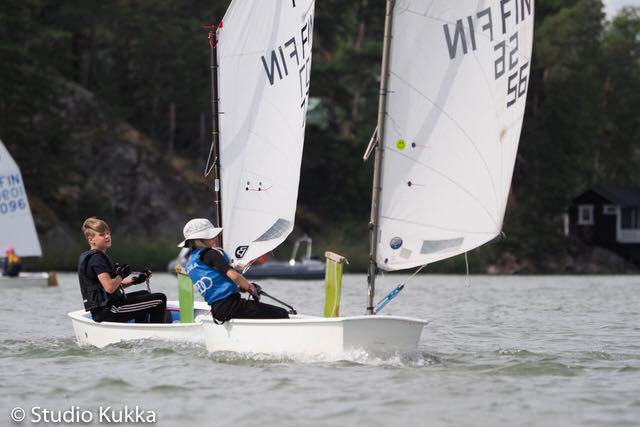 ”Sportsmanship within the Finnish sailing community was alive and well at the Airisto Regatta during the 9th-11th of August.  About a week before the regatta, Laura Santala –the coordinator for boating for children and youth, informed the entrants of an opportunity Suomen Purjehdus ja Veneily ry – Segling och Båtsport i Finland rf provided for the cadet class sailors.  All the cadet Optimist sailors were invited to a training session to be held in the unfamiliar waters the day before the start of our two days of racing.  This was helpful as it allowed me to know already what the sailing area was like.

One of my friends who lives in the Turku area came early on the beautifully sunny Saturday and even helped me to launch.  The Saturday weather remained sunny and gorgeous throughout the day. We had three races on Saturday and three on Sunday.

Saturday’s first race wasn’t very windy and for a while I was in the lead, but then later dropped back to recieve a third place finish.  The wind kept increasing throughout the day. During the third race, the wind blew so many sailors over the startline prior to the start that two general recalls were announced before we finally were away on our third attempt of starting.

On Sunday our HSS team was just finishing our morning run with our coach Sara when the rain started to fall.  Throughout Sunday’s races the weather consisted of everything from light misting rain to heavy torrential downpours.

Remember me bringing up sportsmanship at the start of this report?  Well, thanks to a shackle from an MP parent and a downhaul clip from a HSK parent, I – a HSS sailor, was better able to handle the wild weather which mother nature added to the race course.  (My downhaul’s snap shackle had opened a couple of times during the previous day of sailing, and I forgot to mention this till after the shops closed on Saturday.)

Before we went out for Sunday’s races it was really windy.  Just after the start of the first race, the strong winds went away and continued to drop as the race went on….and I won the first race!  Race two was another rainy race. During the middle of the third race right after the wind seemed to disappear for a while, we were left with rains which were hard and heavy.  So hard it was difficult to see the land on shore and the sea looked like a solid piece of glass which had raindrops bouncing up and down on it.

By the time of the awards ceremony the wild weather was past.  My teammate, Lily-Sofie, and I were delighted to have won the silver and gold medals for HSS. It’s nice winning a gold medal!” 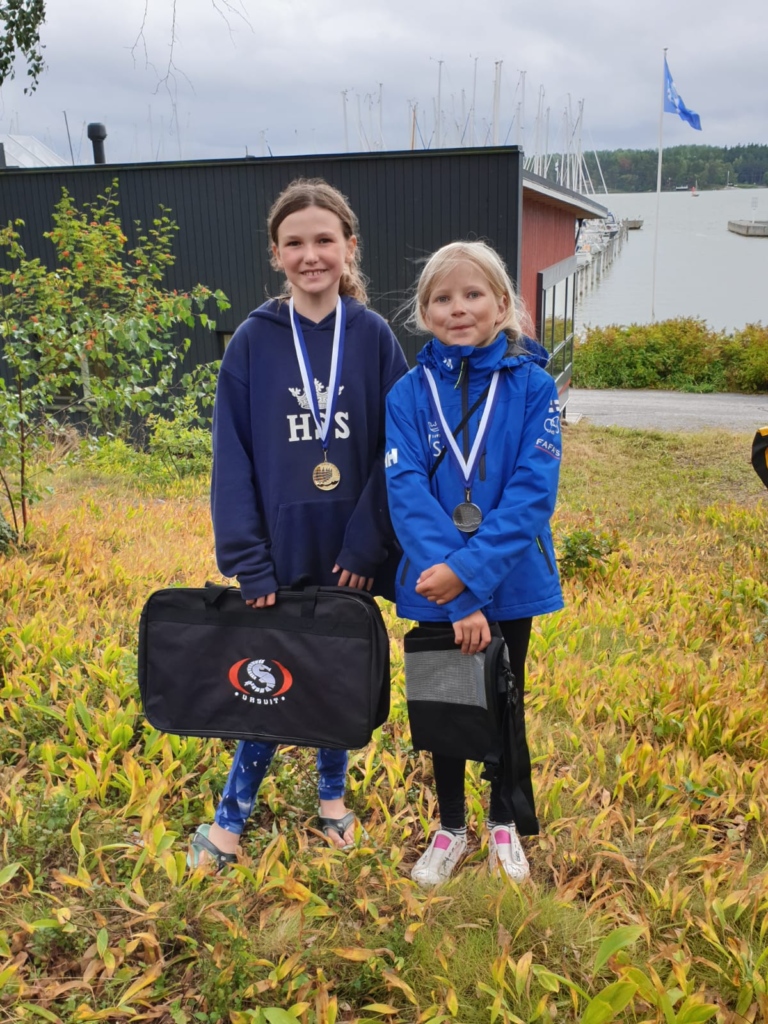